May 30, 2017
by San Francisco Law Library Leave a comment 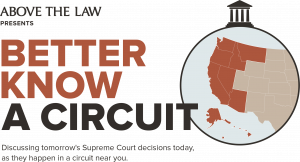 Above the Law’s Better Know A Circuit

The majority of the time the final say on Federal Law is rendered in your area by the U.S. Court of Appeals in your part of the country (or circuit).  The U.S. Supreme Court only rules on a handful of cases, leaving these circuit courts to do a lot of the heavy lifting.  But what do you actually know about your Circuit Court of Appeals?

If you live in the Bay Area, you are in luck!  On Tuesday, June 13, 2017, the first of Above the Law‘s Better Know A Circuit Court event series starts with our very own Ninth Circuit.  The event will be held at Hastings College of the Law from 6:00 to 8:30 PM at 200 McAllister Street.  You can request your RSVP here.

Map of the Ninth Circuit

The Ninth Circuit has a reputation for being progressive, even though its chief, Judge Sidney Runyan Thomas, is a well-known conservative.  The President and many other Republican leaders have called for the dismantling of this largest of the Court Circuits into two distinct circuits.

What better time to learn more about this interesting and influential Circuit Court?  A panel will discuss how the court functions, some of the key judges on the circuit, and which cases the Ninth Circuit is deciding today that the Supreme Court might take a look at tomorrow.

Don’t miss this fantastic opportunity to learn in detail about your Ninth Circuit Court on June 13!