Each month we will seek donors to purchase a new title for the Law Library. Here is our Wish List for the month of July. Growing our collection is about so much more than a single book—it is a living demonstration of how the Library expands the public’s access to justice and provides legal practitioners with the tools they need to represent members of our local community. Please see our Donation Guide for more ways to support the Law Library.

Thank you to author Heidi K. Brown for generously donating her two books Untangling Fear in Lawyering: A Four-Step Journey Toward Powerful Advocacy (part of the May Book Drive) and The Introverted Lawyer: A Seven-Step Journey Toward Authentically Empowered Advocacy. And come to our upcoming free lunchtime program on August 9th featuring the author herself!

To donate, please contact sflawlibrary@sfgov.org or call (415) 554-1791. We appreciate your contribution!

From September 12th to the 14th San Francisco will host the Global Climate Action Summit, an event which will bring together environmental leaders and activists from around the world, both for the summit as well as the hundreds of related affiliate events throughout the week.  Even if you can’t make it to any programs or events, you can still take a look at our newest LibGuide: The San Francisco Law Library Guide to Environmental Law. 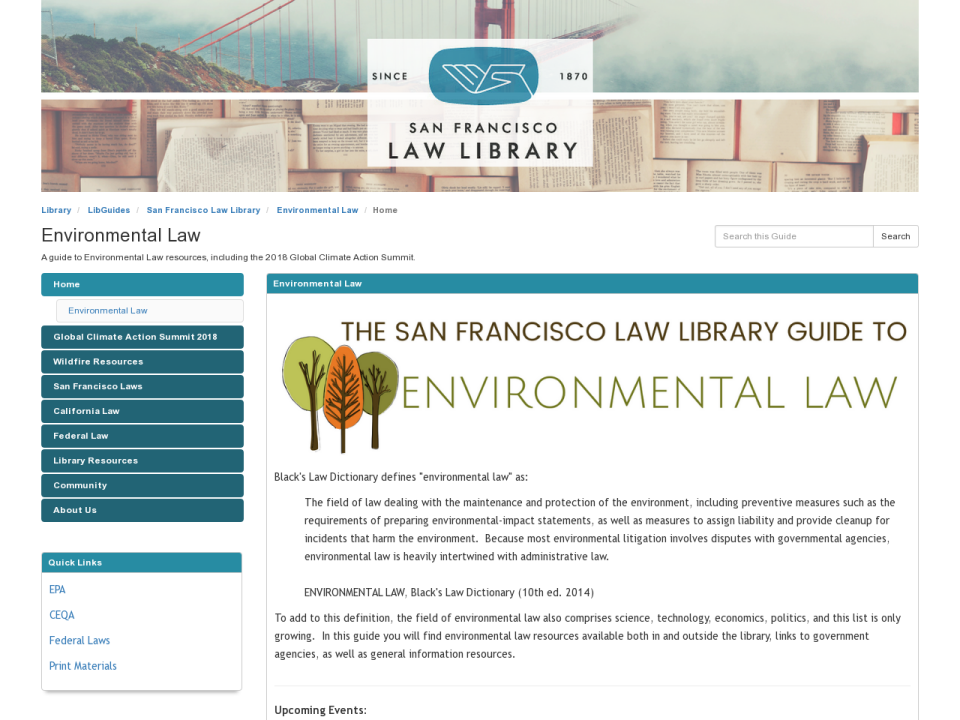 In this guide you will find information on local, state, and federal environmental statutes and regulations, library resources in print and online, current news and events, wildfire resources, and links to the many state and federal agencies dealing with environmental issues.

Environmental law is an interdisciplinary field which encompasses science, technology, the economy, industry, and more.  To that end, this research guide also includes links to local and global organizations dedicated to environmental activism, as well as informational sites on related topics.  We will keep updating the guide (and all of our guides), so be sure to check back in!

And for more on environmental law, check out our September Books of the Month:

With current attacks on clean water protections for rivers, lakes, streams, and other waters still making headlines, the Clean Water Act (CWA) is as relevant today as ever. Learn more about one of our most important environmental law statutes in The Clean Water Act Handbook (4th), edited by Mark A. Ryan. The contributors reflect a thoughtful balance of public and private sector attorneys, all experts in the CWA, and topics range from the broad (enforcement) to the narrow (calculating Total Maximum Daily Loads in accordance with section 303(d)). The handbook begins with the historical background of the CWA, tracing its origins from the Rivers and Harbors Appropriation Act of 1899 (the first federal statute governing water pollutions control) to the 1972 act itself, which was passed in response to a flood of litigation concerning sources discharging pollutants, as well as growing public awareness. Once grounded in the historical context of the act, the book then moves on to tackle the essentials of the various collaborative federal and state programs which have risen up to regulate water pollution.

The purported goals of the CWA are eliminating pollutant discharges and providing fishable and swimmable waters, and the handbook addresses each item and related issues in turn, including explanations on implementing regulations and guidelines. The threshold (and still contentious) question of what constitutes “Waters of the United States” (WOTUS) which the act protects gets its own chapter, as do the National Pollutant Discharge Elimination System (NPDES), Publicly Owned Treatment Works (POTWs), Section 311 Oil and Hazardous Substances Spills, the types of activities considered “discharges of dredged or fill material,” enforcement, whether civil judicial, civil administrative, criminal, or citizen suits, and how the CWA applies to federal facilities. In the absence of congressional amendments, the scope of the CWA is still being discussed by the courts, and later chapters discuss the powers and limitations of judicial review, as well as the influence exerted by successive administrations in Washington.

Even if you live in an arid, landlocked part of the country, the CWA still matters since the act affects the economy, industry, politics, technology, and much more. This handbook serves as both a practical tool for practitioners as well as a good introduction for the interested citizen to this ever-evolving statute. Though the CWA hasn’t been amended since 1990, the act is still heavily litigated, debated, and reinterpreted, so staying on top of changes is crucial. Come read this and other environmental law titles (such as The Clean Air Act Handbook) at the Library today!

The air we breathe may be free, but that doesn’t mean it still isn’t regulated. Nearly five decades old, the Clean Air Act (CAA) remains one of the most significant pieces of environmental legislation in the United States, and it is still the only available tool for regulating greenhouse gas emissions that cause climate change. To help practitioners and concerned citizens alike understand this complex statute, the Library has The Clean Air Act Handbook (4th), edited by Julie R. Domike and Alec C. Zacaroli. The contributing authors bring their collective years of public and private sector experience and knowledge of the CAA, and many were even involved in the development of the very statutes and regulations discussed in the book. From the beginning of modern air pollution control laws in the postwar era, to the minutiae of current permitting processes, this book covers the entire act in twenty comprehensive chapters. Some of the topics discussed include National Ambient Air Quality Standards (NAAQS), the Visibility Protection Program designed to protect scenic vistas in our state parks and wilderness areas, State Implementation Programs (SIPs), Hazardous Air Pollutants (HAPs), and civil and criminal enforcement. Perhaps of particular interest to Californians are the chapters about global climate change/greenhouse gas (GHG) emissions and the regulation of motor vehicles, including the seminal 2007 Supreme Court case Massachusetts v. EPA. The authors also point you towards related documents, such as the legislative history of the CAA or the EPA’s administrative records, which can be found for free online or maybe even at your local law library.

Photo by Elia Clerici on Pexels.com

The authors believe that practitioners who master the basic CAA policies and tools available, as laid out in the book, will find solutions to most CAA problems. Though intended as a reference resource and tool for CAA practitioners and the more general environmental practitioner in need of a quick CAA tutorial, the handbook is clear and straightforward enough to appeal to any interested citizen as well. You will gain a solid foundation for understanding environmental current events (of which there seem to be many), and will learn to tell your HAPs from your SIPs.

The Clean Air Act is the intersection of law, politics, science, technology, economics, and everyday life, and changes can happen very quickly or possibly not at all. The act affects both the regulated/corporate community and the public, and anyone with computer access can participate in rulemakings, monitor workshops, apply for a permit, watch webcasts, and send emails to EPA and state agency staff. The editors stress that this book is merely a snapshot of the act in time since the EPA regularly issues new regulations and guidance, and the courts continue to shape the law in the absence of congressional action. So use this book as a starting point. It could give you something to think about the next time you take a breath.

In addition to discussing statutory and common law sources of liability, Managing Environmental Risk also takes into consideration the concerns of the various parties involved, making this book accessible to more than just attorneys. Alongside reference materials, practitioners will also find checklists and drafting suggestions for transactional planning, as well as sample provisions for drafting documents. This title is also available in its entirety through our Westlaw database. Find this and many more environmental law titles at the Library today!

The library would like to thank the author, Jennifer Machlin, for generously donating this title. To learn how you can donate, please see our Donation Guide.

We have some wonderful free MCLE Lunchtime Speaker Programs coming up! Be sure to add the following two programs to your calendar, and check back with our Speaker’s Guide, website, Facebook, or Twitter to stay up to date with new programs. All of our MCLE seminars are free and open to the public. Registration is not required, and seating is available on a first-come, first-served basis. Stay tuned for news about more dates in our ongoing Employment Benefits series presented by the U.S. Department of Labor and the Library. We hope to see you there!

An Overview of the California Environmental Quality Act, its Public Impression, and its Ongoing Importance, with a Focus on Large-Scale (and Controversial) Projects

This program will build on basic topics introduced in the July 13 program, but patrons who did not make it to Part 1 are welcome to come.

Tuesday, July 25, 2017, Noon to 1:00pm, California’s Maligned Environmental Law:
An Overview of the California Environmental Quality Act, its Public Impression, and its Ongoing Importance, with a Focus on Large-Scale (and Controversial) Projects
Presented by:
Tom Engels, PhD, Principal, Horizon Water & Environment
Rob Peterson, PhD, CEQA Project Manager, California Public Utilities Commission (CPUC)
Jonathan Koltz, Legal Counsel, CPUC
1 hour free Participatory MCLE Credit
The California Environmental Quality Act (CEQA) is California’s premier environmental law, and a model for similar laws across the country.  Although it’s revered by many, it’s also often derided as a boondoggle that gives undue leverage to NIMBYs and special interest groups.  Governor Brown, for example, has called attempts to ease its restrictions “the Lord’s work.” CEQA requires consideration of environmental impact on the development of “projects,” and requires the consideration and screening of a wide range of alternatives.  It has been controversially invoked as a drag in a wide range of situations, from creating new bike lanes to building large-scale utility projects.

In this hour-long program, Tom Engels, PhD, a principal at Horizon Water and Environment; Rob Peterson, PhD, a CEQA project manager at the California Public Utilities Commission (CPUC); and Jonathan Koltz, a lawyer with the CPUC, will provide a brief overview of the CEQA process, discuss why CEQA’s policy goals can be poorly perceived—and why those perceptions might not be entirely accurate—and explain why CEQA remains a vital tool for informing both the government and the public about the projects subject to the law.  They will provide examples from their work at the CPUC, with a focus on how staff have approached the complex process of reviewing, and finding alternatives for, large utility infrastructure projects with price tags that typically exceed $100 million and that affect thousands of Californians.