June is Elder Abuse Awareness Month, and the Library has a brand new research guide on the topic. From high profile figures, such as philanthropist Brooke Astor and Marvel’s Stan Lee, to our friends and neighbors, elder abuse affects everyone and can come in many different forms, ranging from physical to financial abuse. As the global population ages, protecting these vulnerable members of society from exploitation, neglect, and other injuries has become a growing area of the law. 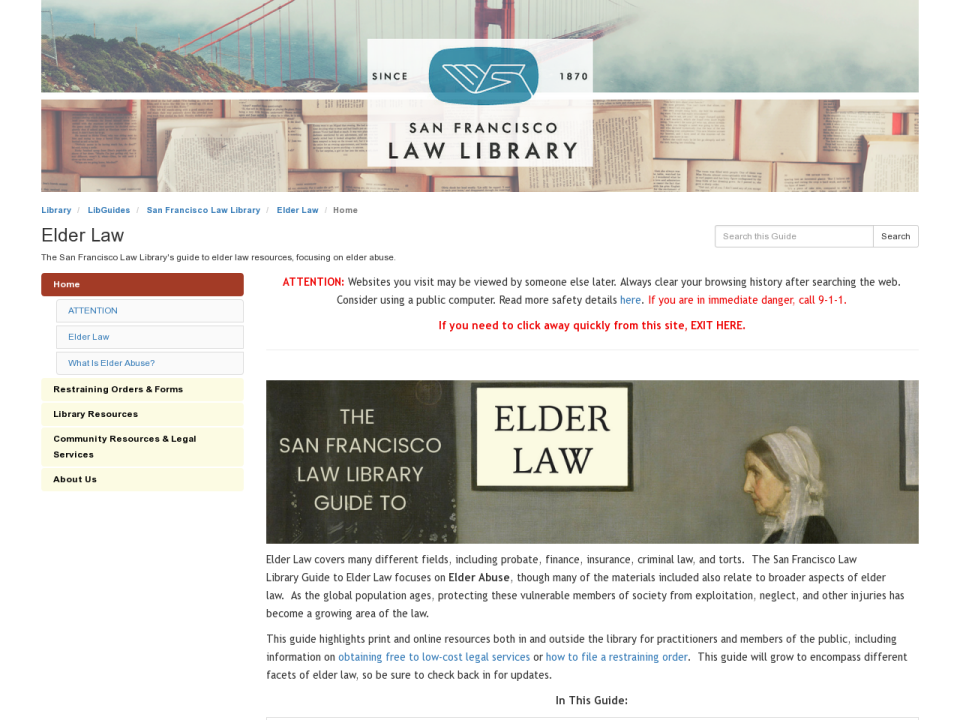 Elder law covers many different fields, including probate, finance, insurance, criminal law, and torts. The San Francisco Law Library Guide to Elder Law focuses on elder abuse, though many of the materials included also relate to broader aspects of elder law.  The guide collects key California resources on statutory and other remedies against financial and personal abuses from family members, strangers, and caretakers, including reporting resources, planning for long-term care, and for proceedings for guardianship, conservatorship, and other legal approaches to safeguarding the lives and assets of elders.

This guide highlights print and online resources, both in and outside the library, for practitioners and members of the public, including information on obtaining free to low-cost legal services and how to file a restraining order.  This guide will grow to encompass different facets of elder law, so be sure to check back in for updates.

In addition to our recently published guide How to Use CEB OnLAW, you might also be interested in our research guide on Domestic Violence Resources and Veterans Resources.

In honor of Juneteenth, celebrating the end of slavery in the United States, the Congressional Research Service has issued an updated Juneteenth: Fact Sheet, with an extensive summary of its history, legislation, and samples of Congressional speeches and Presidential proclamations and remarks.  The CRC guide also includes a table of states—including California–that recognize Juneteenth as a State Holiday.

The recognition in CA is through adoption of Government Code §6719 [effective 2004] which designated the 3rd Saturday in June “Juneteenth National Freedom Day: A day of observance.” Juneteenth is not currently a Federal Holiday.

The Emancipation Proclamation, signed by President Lincoln on January 1, 1863, is available for viewing digitally, 155 years later, as a treasure of the National Archives.

As knowledge is power and its own celebration, the San Francisco Law Library also offers free access to all of its professional legal information databases, including the digital library found on HeinOnline, Slavery in America and the World: History, Culture & Law, which collects every statute once in force in the American colonies and states, all reported state and federal cases on slavery, early Congressional debates, along with historical and contemporary articles on the battle for civil rights and emancipation.

And this weekend, on Saturday, June 16th, there will be a Juneteenth Celebration in the Fillmore!

Thursday, July 19, 2018, Noon to 1:00pm
Free Speech and the First Amendment:
Why do we give Nazis free speech—and should we?

In the wake of neo-Nazi riots in Charlottesville and elsewhere, and a surge in hate crimes across the country, a complex question that has recurred in American law and society for centuries is once again in the public eye: how much tolerance should the nation have for unpopular speech or minority opinions?

Renowned law professors and leading appellate judges will discuss the current state of free speech law in the United States, how and why those approaches developed, the effects liberal speech rights have had for good and ill, how other countries approach free speech questions, and more.

Seating is on a first-come, first-first-served basis.

Co-sponsored with The Bar Association of San Francisco

Did you know that the San Francisco Law Library offers free online access to CEB titles? OnLAW includes over 150 Continuing Education of the Bar, or CEB, publications, including practice guides, action guides and downloadable forms. OnLAW can be accessed from within the library. 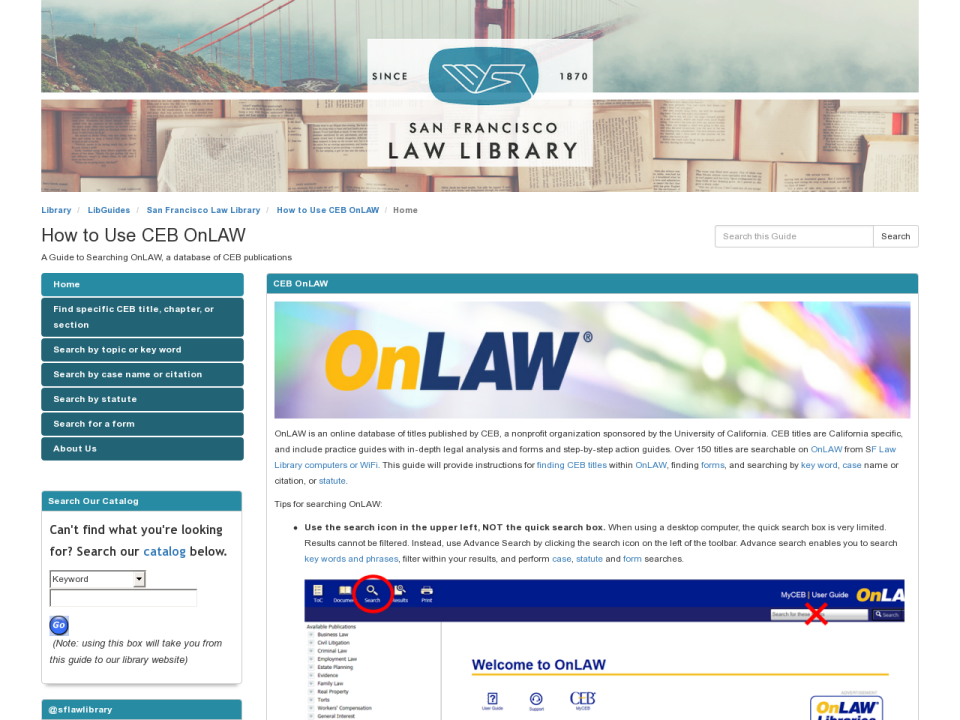 New LibGuide: How to Use CEB OnLAW

SF Law Library’s new LibGuide, How to Use CEB OnLAW, provides step-by-step instructions for using OnLAW, including how to: 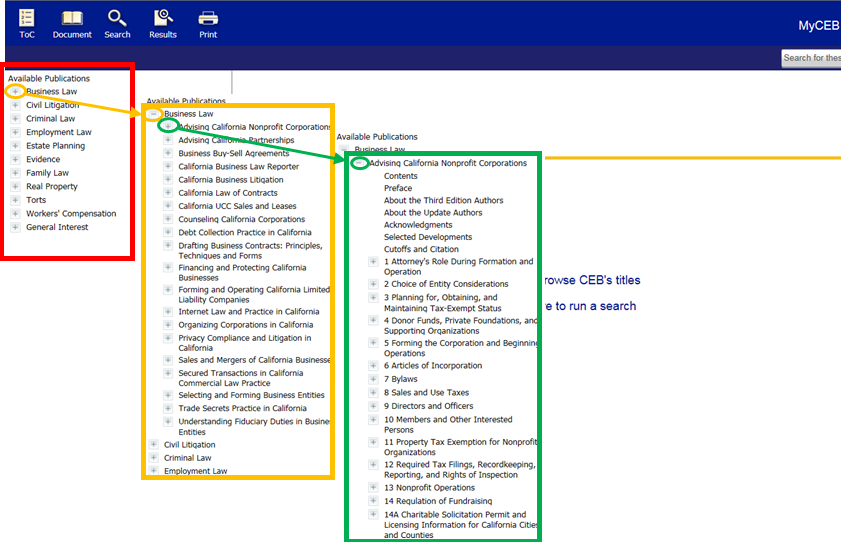 Introduction to Legal Research on Westlaw