May 21, 2018
by San Francisco Law Library Leave a comment

Today, May 21, 2018, is the last day to register to vote for the June 5th Statewide Direct Primary Election. Just in time to make this deadline, the San Francisco Law Library has updated our Elections LibGuide with information on candidates and ballot measures featured in the June 5th Election, as well as how to register to vote, where to vote, new materials we have added to our print collection, and more. 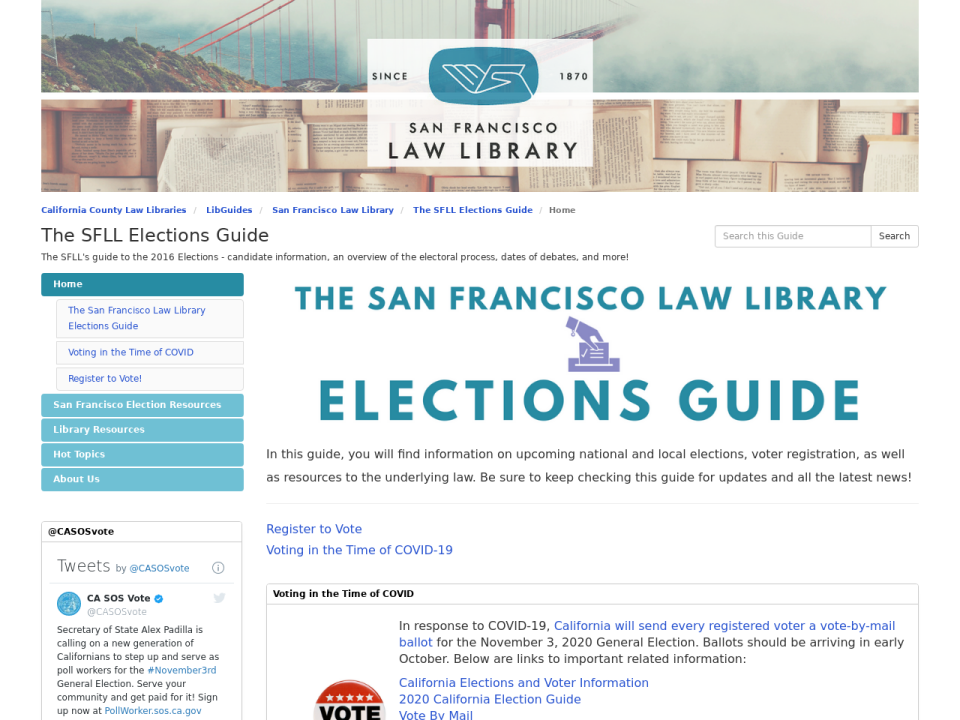 May 14, 2018
by San Francisco Law Library Leave a comment

Celebrating Human Greatness in the Law

Celebrating Human Greatness in the Law is a group conversation about how the human spirit gets expressed in high conflict situations.  We share stories of times that greatness touched our lives, enriching each other with our memories and re-connecting with our own greatness.  Many of us will tell stories from our rich experience in our work as lawyers, mediators, paralegals, and legal workers. Get to know lawyers and others on the journey while being inspired to live and work fully in the moment.  When have you acted in greatness?   Have you seen others acting in the spirit of greatness?  Bring your stories. Our meeting will be facilitated by John O’Grady.  John guides people to navigate family conflicts about guardianship, aging, death, taxes, inheritance, and property rights while addressing the underlying conflicts, salvaging important relationships, and staying connected and in conversation for a lifetime. This end result is priceless.

John O’Grady is an estate planning lawyer and a mediator of inheritance battles.  He has been practicing in San Francisco for more than twenty-five years.  He served as the 2012 Chair of The Estate Planning, Trust & Probate Section of The Bar Association of San Francisco.

May 11, 2018
by San Francisco Law Library Leave a comment

Presented by Cathy Wong
Staff Attorney, Swords to Plowshares
1 Hour Free Participatory MCLE
Learn how to put together a winning a claim for VA service-connected benefits. Understand the three elements of service connection and how to develop and present evidence on these elements to the VA to support a veteran’s benefits claim. Additionally, learn how to change a bad paper discharge to make a veteran eligible for VA health care and benefits.

May 3, 2018
by San Francisco Law Library Leave a comment

Dissent and the Supreme Court: Its Role in the Court’s History and the Nation’s Constitutional Dialogue
by Melvin I. Urofsky
Reviewed by Tony Pelczynski, Reference Librarian

Dissent and the Supreme Court, by legal historian and professor of constitutional history Melvin Urofsky, is a dense but lively examination of the evolution of the written dissent in U.S. Supreme Court Constitutional jurisprudence. In less skillful hands, such a topic might not spark much excitement; here, Urofsky manages to keep things moving along briskly enough for the casual reader.

After beginning the book with a relatively brief but informative introduction, including side-trips explaining concurring and “seriatim” (separately-written) opinions, Urofsky traces the history of U.S. Supreme Court dissent largely chronologically, with chapters devoted to particularly significant cases and prolific dissenters (including Louis Brandeis, the subject of a separate Urofsky biography). Early on, Urofsky lays out the historical arguments for and against the very idea of dissenting judicial opinions. To grossly oversimplify, this debate breaks down to something along the lines of: dissent (in the author’s words) “weakens the force of the decision and detracts from the court’s institutional prestige”; versus (quoting Chief Justice Charles Evans Hughes) “[a] dissent in a court of last resort is an appeal to the brooding spirit of the law, to the intelligence of a future day, when a later decision may possibly correct the error into which the dissenting judge believes the court to have been betrayed.” The tension between these competing beliefs regarding the role of the judicial dissent, and how that tension has played out on the Court, provides the focus of Dissent and the Supreme Court.

Throughout the book, Urofsky pays particular attention to dissenting opinions that have directly impacted later Supreme Court jurisprudence in areas of universal national concern. For example, he succinctly explains how dissents written in the 1883 Civil Rights Cases provided the analytical framework for the Court’s later upholding of the 1964 Civil Rights Act. Likewise, Urofsky devotes an entire chapter to Brandeis’ famed dissent in Olmstead v. U.S., a 1928 case in which the Court upheld the conviction of a Prohibition-era bootlegger convicted on the basis of what would now be considered illegally-obtained wiretapped telephone conversations. According to Urofsky, Brandeis’ dissent ultimately “reinvented Fourth Amendment jurisprudence,” albeit belatedly, as the Court fully adopted Brandeis’ position and overturned Olmstead completely in 1967.

While the significance and role of the dissenting opinion has waxed and waned over time, we are currently living in an era where, by the author’s accounting, four out of five U.S. Supreme Court decisions include one or more dissenting opinions. And since the book’s original publication in 2015, the Court (and, perhaps, the nation) may have become even more ideologically divided. Clearly, judicial dissent has become a ubiquitous feature of U.S. Supreme Court jurisprudence, and will remain so for the foreseeable future. To help make sense of it all, Urofsky has written a well-researched and highly readable examination of the history of judicial dissent in U.S. Supreme Court jurisprudence, its evolution and function over time, and why it matters.

Dissent and the Supreme Court was generously donated by Shannon K. Mauer of Duane Morris LLP, as part of our February Book Drive.

May 2, 2018
by San Francisco Law Library Leave a comment

Each month we will seek donors to purchase a new title for the Law Library. Here is our Wish List for the month of May, featuring books about the infamous Dred Scott case and cannabis. Growing our collection is about so much more than a single book—it is a living demonstration of how the Library expands the public’s access to justice and provides legal practitioners with the tools they need to represent members of our local community. Please see our Donation Guide for more ways to support the Law Library.

To donate, please contact sflawlibrary@sfgov.org or call (415) 554-1791.  We appreciate your contribution!

Thank you to Shannon K. Mauer of Duane Morris LLP for generously donating Dissent and the Supreme Court: Its Role in the Court’s History and the Nation’s Constitutional Dialog, part of our February Book Drive.

Thank you to Robert Gates for generously donating The 2018 Solo and Small Firm Legal Technology Guide, part of our February Book Drive.

Thank you for your support!